We just finished post-mortem on our latest show and we were watching our sports story which was the ever-popular “road to state” coverage of our girls basketball team.  In the interest of time, we decided to put both the district finals and the state game together for the show.  When we watched the story in class, the staff all agreed that the writing was a lot more solid for the state story than for districts.

Our reporter one-man-banded it for both stories.

Before the state tournament, though, we decided that tweeting updates and scores would be a pretty effective…and fun…extension of our coverage.  So, in addition to our reporter shooting the game, he also tweeted during breaks in the action (time outs, free throws, etc.).  The end result?  The state coverage included more specific stats and better in-depth coverage.  The correlation is something that good reporters have always known:  when you write down your observations – be it online, on paper, etc. – your writing greatly improves.

Looking back on it, his tweets looked like something right out of a reporter’s notebook:  quick observations and basic stats while he was at the event. The best part was when he was putting together his story, he referred to our Twitter page for notes.  Very, very cool. 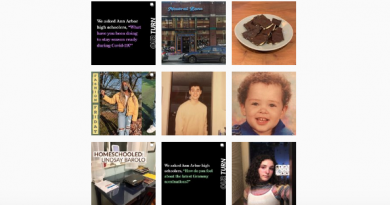