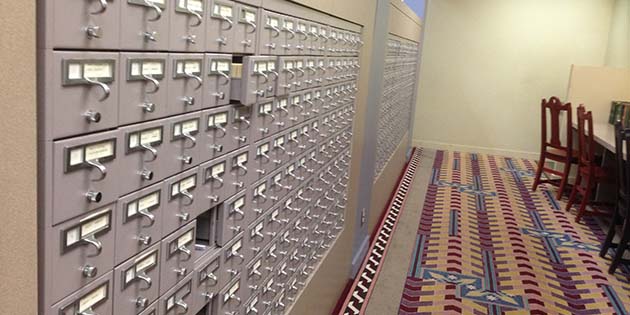 On an art and architecture tour of the Los Angeles Public Library during the December school holiday, a non-digital secret revealed itself.

What’s my New Year’s Resolution? —  to take advantage of it.

The LAPL card catalog went digital long ago, and the outdated technology was sold to an artist who used only cards containing the words “complete” and “comprehensive” for a wallpaper installation in the building’s elevators.

The Dec. 28 tour guide explained the cards for genealogical research are the only ones that weren’t computerized. Multitudes purchase access to family histories online, when the potential to do so remains free at the bottom floor of LAPL, considered one of the top 20 most beautiful libraries in the country.

Giving context to the genealogy section was the first-floor chamber which previously housed drawers and drawers of card catalogs: there stood the library’s Christmas tree at the time I visited. Above the seasonal tree was a glorious 360-degree panoramic ceiling mural painted by an early 20th-century British graphic designer.  The traditional print illustrator was initially criticized for using the same type of bold, blue outlines in his room-size narrative of California history as he was accustomed to using in his magazine illustrations; many patrons considered it low-brow and cartoonish.

The library’s record of preservation and modernization — seen through its art and architecture — was illuminating, but not as satisfying as the institution’s choice to keep the family history portion of its traditional card catalog usable.  I felt like a traveler who serendipitously stumbled upon a lost relic in a digital wilderness.

If I had a class who could take advantage of the old-style card catalog for a genealogical unit, I would absolutely do it.

As it stands, my New Year’s resolution is to return and attempt an old-school search of my own family history.

Michelle Packansky-Brock’s learning community a must — just do it! 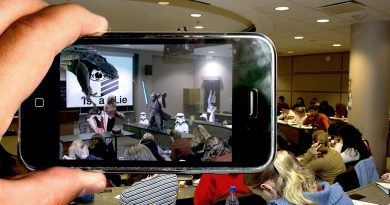 VR vs. AR vs. MR: Invite Students to Explore Other Realities