I am one of those advisers who is a traditional print journalist.  Adding video to my program’s on-line news site has been slow and painful.

Recently, I attended the JEA Broadcast and Video Bootcamp from Michael Hernandez in San Francisco.  I also attended all of his broadcast classes Saturday morning: “Sound design and recording for broadcast”; “Secrets to a successful broadcast program”; and “iPhoneography for video journalism”.

Armed with such materials and some experience (the bootcamp by design groups attendees together and sends them out to capture video and create a broadcast by the end of the day), the last assignment in my beginning journalism class this year was a video news story.

In addition to the bootcamp knowledge, I also used Video Coach I and Video Coach II in class, because I believe they offer very important and fundamental knowledge that I don’t have myself.  My students were evaluating videos from other classes as they walked through my door every day.

For this J1 experiment, my students used iMovie, tripods, point and click cameras, and no external mics (because we don’t yet have the proper equipment).

When my students showed any signs of panic about what shape their final videos might take, I reminded them that the only thing I was interested in is what they learned.  And, learn we did!

Before students showed videos (many worked in pairs), I asked them (1) what did you do well? (2) what would you do differently next time? and (3) what did you learn?

We started May 7 and ended May 30.  I thought this would be too much time, but with the Video Coach DVD tutorials, some concept sheets, and time to plan stories, arrange interviews, capture video, and edit, I had students who were editing video right up until the last 20 minutes of the final exam class period.

Here are some quotes from my students about what they learned or what they would do differently next time. 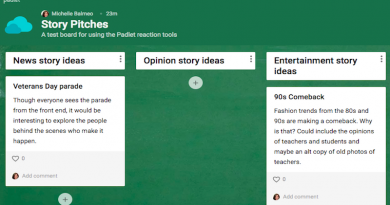 One thought on “Newbie videography teacher, students share what they learned from JEA bootcamp”