The Oregon Daily Emerald is moving from five printed publications a week to two and ramping up its on-line presence.  This is their strategy.

Innovate now for the right reasons “Editors acted off instinct — about what their student peers want in a media outlet, where the industry they love is heading, and why breaking from 90 years of tradition will better the Emerald as a whole”

Take control of the news cycle “Staffers are preparing to both speed up and slow down their coverage, at their discretion and to everyone’s benefit.”

Create different kinds of beats, brands  “To this end, the staff will unveil specialty blogs and something called micro-beats. Coined by Rossback, the micro-beat is a coverage area more specific or timely than most reporting beats, especially at the student level.  Among the micro-beats the paper plans to cover come August: student debt, the business of college athletics (something the school knows a bit about given the heavy Nike presence), and declining state support for public universities (another issue of high current relevance at UO).”

Get out of the railroad business  “It’s the line about ‘The railroads aren’t in the railroad business, they’re in the transportation business,'” (Ryan) Frank said. “We’re not a newspaper, we’re a media company. From a news standpoint, we’re informing, educating, and entertaining our readers to help develop them as citizens. From a business standpoint, our goal is to be the portal to campus for anyone trying to reach the audience.”

Be a bit of a maverick  “They are also cognizant of the possibility that the whole shebang might fail miserably. But given the gale-force winds of change swirling over the media landscape and the need for more student publications to truly pioneer the digital frontier, they view their attempts as well worth it.”

How I’m surviving my first year as adviser: Increasing Pageviews 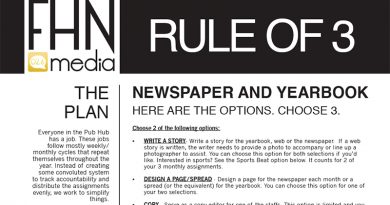