On Aug. 26, students working on Carmel (IN) High School’s HiLite Web site posted three new stories and a Photo of the Day. The next day, they posted six new stories, another photo and a short video about the school’s Activities Day event. The day after that? Four stories, a photo and special coverage about the Freshman Class elections, which included bios of all the candidates and answers to selected questions about their candidacy.

And the HiLite staff plans to do it all again – in fact, they’ll probably do more – this week and the next week and the week after that.

From a print standpoint alone, it can be daunting to think about all the pressure to complete what we already do in any given year. The newspaper is hard enough, with its constant deadlines. To add a Web site to the mix? Fuhgeddaboutit, right?

Wrong. If our staff has learned anything over the years, it’s to work smarter, not harder. And that’s an adage we employ when we post our information to the Web while still keeping up with our print obligations. Here are some tips on how we operate. Maybe they’ll help you as you move online.

Cut down your print production: We used to produce 14 broadsheet issues of the HiLite each year, along with six issues of our topically-based newsmagazine, the Acumen. This year? Ten tabloid-sized HiLite newsmagazines and four issues of the Acumen. Because they come out less frequently, those print issues will focus even more on long-form, narrative storytelling (more magazine-y). And the shorter form, inverted-pyramid style, news briefs? Well, we’re using those to…

…put more stories online: Every student on the HiLite staff is required to write a beat report – a regular update of some club or activity in the school. Used to be we’d have students write those beats for a particular print issue. Turns out we’d get about 100 beat reports each time, of which we’d be able to print maybe 10. This year? Beats don’t go in print. All of them (well, the well-written ones at least) go online. And the staff has been divided as well. Rather than 100 beats coming in at the same time, we have the staff divided in thirds; so 30 beats come in one week, 30 more come in the next and so on. We have a constant stream of beat reports coming in throughout the year for the Web.

Get someone to have the job of Web posting: Those beats I mentioned above? We’ve got three students on staff whose primary job is to sort through the beats, copy edit them and post them online. And they don’t post them all at once. Depending on a story’s newsworthiness, they can schedule a story to post later in the week, or even on the weekend. When they post the beats, they can coordinate them with our interactive calendar that rests on our Web site. So readers can scroll over a date, see what’s going on with, say, the Key Club that day and link to the story.

Change some of your beats to “multimedia” beats: I have a couple of students on staff who come from a video background. They still have to complete a beat report, but rather than producing a traditional written beat, they do theirs in video form. Since they’re not assigned a specific beat area, they can cover anything that’s newsworthy. That means every week or so we have a new video to post online. We do the same with our photographers. They’re each assigned a “Photo of the Day,” which they must complete on their assigned day and post online.

Make Web-specific positions: The Web allows for some amazing multimedia possibilities. But if you don’t have someone (or someones) to spearhead that effort, nothing will get done. This year we started a Special Projects team whose job is to do just that. That team is not constrained by the print deadline. Rather, they publish (or post) whenever something is newsworthy. For example, so far this year the Special Projects team has posted a “New Student Survival Guide” for the first week of school and a “Guide to Freshman Class Elections” just last week. The team plans to do even more this year, including Homecoming, prom and graduation coverage.

We’re still exploring other options to push more content online, but this is a start. Feel free to use or modify any of these ideas for your staff. And if you have some ideas of your own? We’d love to hear ‘em. Just send an email my way –  jstreise@ccs.k12.in.us. 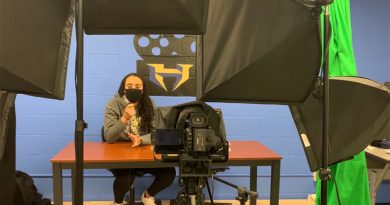 I’m adviser Sydney Swanson, and this is my newsroom…

Glogster might be an alternative story design for news sites