With digital media, publications can show their audience more photos than a print publication, but only if the photographer captures the pictures.  This is not as easy as it may appear.

Two months ago, I visited Disneyland with my wife and two children for my daughter’s seventh birthday. I knew I would return to Anaheim two months later for the convention, so I was contemplating my presentations, including my concert presentation with Ina Herlihy, the 2010 Student Journalist of the Year. Because Ina works hard, she makes photography look easy. I wanted to create an exercise for students to practice concert photography that would also illustrate the difficulty of concert photography.

Just then, the Disney Dance Crew jumped out on a Disney California stage. The light was perfectly imperfect. Performers moved quickly; their expressions changed suddenly. My daughter screamed. My son became shy. Some of the dancers smiled while some grimaced. One had big ears, others showed me their backs. Everything moved so fast, and I did not control the environment.

The Disney Dance Crew reminded me of three summer festivals I photographed with the Herlihy sisters. The next few photos were taken by Emma Herlihy, Ina Herlihy’s sister.  In succession, Emma photographed Colbie Caillat, The Bangles, and Miranda Lambert. Notice how the light changed for each photo. Emma struggled with the light and found a good photo of Colbie Caillat. Still, because the stage was so bright, most of the background was also in focus so there are some distracting elements, but this is a good photo. After Caillat performed, The Bangles played. Shadows started to creep onto the stage, and for most of the set, the entire right side of the stage was dark. Emma waited until all three members were in the light. Though the drummer is hidden, this shot works. So much could have gone wrong. Emma took this photo of Miranda Lambert on the same afternoon on the same stage.  Emma took other really good photos that ran in her online publication. I chose this photo, because it shows how Emma used the light and shadows to improve the photo.

Deciding how to deal with challenging lighting situations is not easy, especially when people are moving quickly and thousands of screaming fans are behind you.

So, back to Disney California. I have included two photo galleries from the Disney Dance Crew. The lighting was challenging and there were about one hundred Disney fans surrounding me.

AND A BIG MOUSE ON STAGE!

The second gallery is the same, except I edited the photos. See what you could learn from my struggles.

If you wish to view some of my other concert photos, you can visit my concert gallery collection. 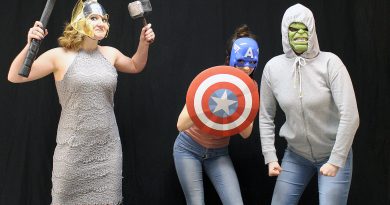