It’s been talked about on here quite a bit, it’s not just enough anymore to have a website, you need to promote it as well or no one will find out about it. Once you get into promoting your site, you realize there really is no reason you shouldn’t be promoting your yearbook, your newpaper, your video broadcast, or just simply your program as a whole. I’m trying something new with the publicity portion of my room this semester. Instead of focusing on a couple large projects over 18 weeks to publicize what’s going on, I have my staff working on weekly quick-hits that everyone participates in.

We all need some sort of publicity teams for our rooms. I didn’t really realize this until the web became such a dominant force and realized that if the staff is not promoting it, people probably aren’t just going to stumble up on it. Since then, I see how publicity should be used for everything from Paper Day (even though they are free papers) to yearbook sales.

So, what do I do when things aren’t working? I try something new.

This semester I’ve revamped the structure of the room’s publicity push yet again. I decided that the sum is greater than the parts and what the plan is, is for the students on staff to publicize the publications in small doses each week.

Here’s how it works.

At the beginning of each week I’ve sent out a note to the members of staff letting them know what they need to be publicizing this week. I give them data to show where we are at and then set a goal. (I think it’s important early on to set pretty attainable goals so that they see their work is paying off). I give them some advice of things they could do and then turn it over to them. They have the week to execute the plan and we detox on it at the end of the week, right before we set the new plan in place.

We are only three weeks into this new plan but here’s what they’ve done so far.

Week One: Goal was to get over the 1,000 Like threshold on the Facebook page. The staff has been stuck at 978 for like four months. Students were told the goal was to hit 1,000 and ways they could get people to like the page ranging from status updates to suggesting it to their friends. I gave them the week for this as a deadline. Two hours after I sent the email the staff hit the 1,000 mark. One week later they had nearly 100 more Likes and now they are sitting at 1,100. Tangible results of a campaign.

Week Two: Goal was to get more students to sign up for the introductory Journalism classes. Schedules were due at the end of week two and I charge everyone with talking to five people (who weren’t seniors or currently on staff) about signing up for an intro class next week. I prepped them on things they could say but left it up to the masses for what and how they said things because I figured their words would be more persuasive than mine. More students in intro classes give us a larger pool to choose from for staff, it gives the staff more work that can be used for publications and it builds a large media team in the school. The more people they have helping, the less work they have to do. It was a concept they understood. Our goal was to increase the number of intro classes by one section for next year. Those stats will not be in for a few weeks though so we won’t know how successful it was until then. (There were a variety of other things done to promote the intro classes by me and the other journalism teacher at the school, but that’s a post for another day).

Week Three: Goal is to get 40 more yearbooks sold before the price goes up Feb. 1. The price of our yearbook goes up to $50 February 1 to $65. Rather than just putting signs up and sticking an announcement in (which we will also do) I’ve charged the staff with having each person look at the list of who has bought a yearbook, find two people they know not on the list, and personally let them know about the price increase. The goal I’ve set for the individuals on staff is for each person to get two people. That would put us well over the 40-book mark but I’m realistic that everyone isn’t going to make the goal. Staffers turned in names of two people they were going to try to get to buy books (I did have to make sure two staffers didn’t have the same person.) and then have until Feb. 1 to get them to buy either at school or online. I’ve actually offered a reward for this one. If they get one of their two people to buy, I’ve promised a sugary treat in class and if they get both of their people to buy I’ve promised a free staff t-shirt for second semester. Throwing in a tangible reward every now and then (especially when money is involved) can’t hurt. Again, I won’t know how this goes for a few more weeks but there will be an end and we will be able to measure the success.

I plan to do 18 weeks of these throughout the semester. Next week, I’m going to challenge them all to come up with a professional looking sign promoting the staff’s website that we can have permanently displayed in the gymnasium. I will take them all down to the gym. We will talk about placement and some ideas of what might look good, then I’m going to challenge them all to create a design. The winning design will be sent off to a professional printer and we will get it on permanent display.

I haven’t thought through completely what each week will be. The vast majority of what the staff will do though will be to promote FHNtoday.com . With the fluid nature of school populations, I feel it will be something we will always need to be promoting.

I’m hoping with this new plan that the staffs see the importance of publicizing their work to others and I want to show them how easy it can be. I want them to have success with what they are doing. I also will be using this as a springboard to bring in speakers in Public Relations and Marketing to show staffers other communications related jobs that are out there if they like what they are doing in the room but not sure if being a reporter is for them.

What is your staff doing to publicize their work? What are things I can do to fill up my 18 weeks? I’d love a few ideas.

Create Wallpapers For Your Readers to Keep in Their Thoughts 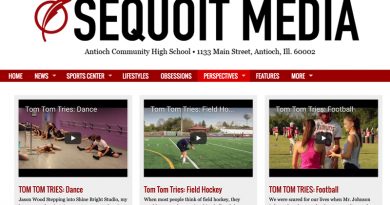