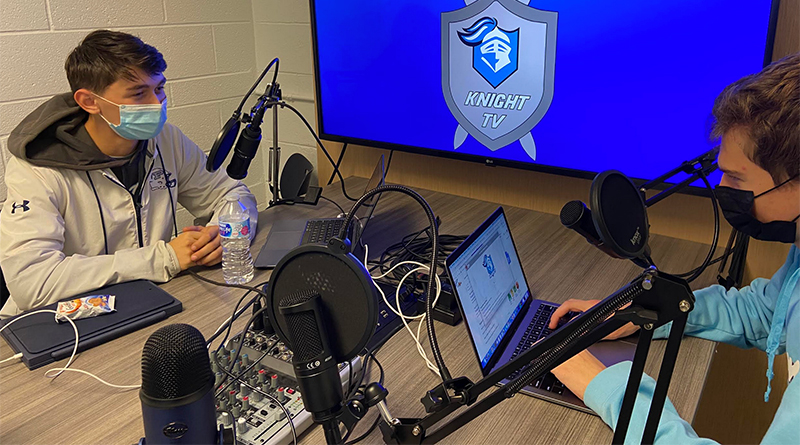 Change after 15 years? Now that can be downright painful.

Yet that was the exact situation I was in when my district in suburban Chicago decided that we were doing away with our traditional Journalistic Writing courses and shifting to a Multimedia Communication model. This was a part of our larger mission to create a “career pathway” for prospective journalists in our building and district, and while I was excited about that possibility, it made me itchy to remove both the words “journalism” and “writing” from my course titles.

Without getting into the logistics of the shift — that should definitely not be the purpose of this post, unless my purpose is to put you all to sleep — I can tell you definitively and without hesitation that this has been a blessing in disguise, a journalistic silver lining that has not only invigorating me, but also my program as a whole.

The most notable change has been in my enrollment numbers. Whereas I used to struggle to fill one section of “J1,” I now for the first time in my 18 years at Prospect have two full sections of the Introduction to Multimedia Comm course. With all of us fighting the constant recruiting battle to keep our numbers up, having a broader base of students to appeal to has made that job infinitely easier.

Whereas I typically was only able to target students with either a love or a gift for writing (or both), now I can include in my target audience students who simply love storytelling in all of its forms. Yes, the honors English classes are still my bread and butter when it comes to being a hot bed of future editors, but now I can find those students who love making videos, who are loyal podcast enthusiasts, who have legendary Instagram accounts thanks to their photo skills … you get the idea. They all now feel drawn to a class that will allow them to creatively express themselves, even if they don’t necessarily have a passion for writing.

Once you have them in the class, the process of adapting your curriculum from Journalistic Writing to Multimedia Communication is easier than you might think. It truly is just a matter of altering your mindset. Whereas I used to start the year with a partner profile assignment, that has now become a partner podcast. They are learning, practicing and (eventually) mastering the same skills: interviewing, finding great quotes/soundbites, identifying angles, etc. But now they are simply recording it on an app like Garageband or AdobePremiere, and then learning how to edit audio on the fly.

That’s just one example of the many I’ve been able to easily and seamlessly incorporate into our one-semester class. Others include teaching them portrait photography when they write their teacher profile and making their main feature story be a broadcast rather than a long-form written piece. It is just a matter of grabbing every opportunity to introduce a different form of media into the course. Yes, this sometimes does come at the expense of having to let go of some of our cherished writing assignments — for example, we now don’t get to column writing until the advanced course. And no, you won’t be able to go as in-depth with some of your units so you can teach the basics of podcasting or shooting good b-roll. But we’ve embraced the metaphor of this class being a appetizer sampler platter at your favorite family restaurant: you get a taste of potato skins, mozzarella sticks, and a hot wing or two, and then you can decide next time (or in our case, next semester or next year) which ones you want to give another try and explore further.

They won’t become experts on any of it in the intro course … and that’s OK.

That sacrifice is well worth it, as they will have the tools to continue evolving as multimedia storytellers throughout their time in your program.

What this all leads to is a shift in your program as a whole, one that for me was more than overdue. For far too long, my program was known as The Prospector, the name of our print newspaper. In the past two years — through nothing more than repetition in every product we post — we have become known as Knight Media, a multimedia program that includes a broadcast channel (KnightTV), podcast channel (KnightVoices), website (ProspectorNow.com) and yes, a traditional newspaper (The Prospector).

In just two short years, we’ve shifted the entire mindset of our school and community. They now ask, “Is Knight Media covering this?” because they all understand that their coverage can come in so many forms — each one complementing (rather than competing with) the others.

By the time students are members of the Knight Media staff (in advanced courses called Multimedia Media Production and Multimedia Storytelling) they are all meeting in the same room during the same block, collaborating on projects for all of our outlets. No more lines being drawn between publications, no more power plays over who gets to cover a topic or event. All of the members of the Knight Media family — editors, producers, directors and reporters — work together for a common goal: giving the Prospect community the most thorough coverage a high school media group can possibly provide.

That might mean an Executive Producer for KnightVoices writing an editorial for The Prospector, or the Managing Editor of the Prospector creating an award-winning documentary for KnightTV. It all works because the students involved no longer feel tied to or restricted by one particular form of storytelling. They have made one of the biggest dreams I’ve had for my program a reality: students no longer identifying themselves as print journalists, broadcast journalists or podcasters. Instead, they all consider themselves multimedia journalists, trained and ready to tell the story through the medium that fits the story topic best.

And I’m not going to lie: it feels great knowing that I’m now doing a much better job of preparing them for the multimedia world that awaits them outside of our classrooms and newsrooms. Whether that be as a producer or consumer of that content is irrelevant — students coming from a true multimedia program understand both the “how” and “why” behind those stories, and are ready to be critical of what they read, see and/or hear.

And I don’t know about you, but to me, that enormous payoff is well worth that initial pain.

*If you would like more information about making a shift to a Multimedia Comm model, I would love to guide you through it! Just reach out to me at jason.block@d214.org.

Have a plan in place for covering tragedy