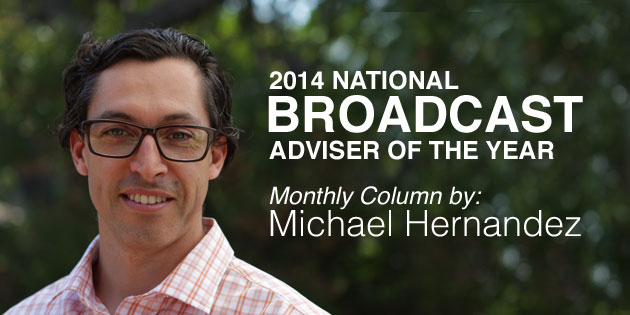 As journalism advisers, we know the importance of reporting multiple sides of every story.   But what if our staffs were inherently incapable of doing so?

That’s the fundamental question I pondered after the Michael Brown shooting in Ferguson Missouri this summer.   Once again, there was major rift in the perception of events between blacks and whites.  And this became even more disturbing when I witnessed the news coverage of the incident.

Well-meaning professional journalists made subtle choices that had a profound impact on our perception of who Michael Brown was, thereby tainting our perception of the facts.  It got me thinking about my own staff, and how we might be making similar decisions that unwittingly lead to biased reporting. This fall, I spoke on the topic at What If…? Philly, and again at the NHSJC in Washington DC.

While smart, hard-working students can tackle topics related to race, gender, religion and other issues like immigration, many subjects and perceptions of them are based on one’s own experiences.  Certain subtleties simply may not be on their radar.  One of the best ways to address this is to have a diverse staff, since their life experiences and perspectives help generate story ideas and approaches to each topic.

When I say ‘diverse,’ I mean including people of many backgrounds including race, gender, religion, socio-economic background, country of origin, sexual orientation, etc.

We need to make an effort to include these underrepresented groups in our staffs, and encourage our staffs to cover topics outside of their comfort zone. This is especially important for broadcast staffs, where diversity is literally in front of the audience with on-camera talent.

While we’re often at the mercy of our school’s demographics, there are several ways we can start to address diversity in our publications right now.

Some tips on diversifying your program include:

For schools who don’t have a strong journalism program, or for teachers without journalism backgrounds who would like to integrate this into their curriculum, I recently published two courses on iTunes U that are free for anyone to use.  It can only help if the ranks of student journalists grow, and in schools and towns where it hasn’t been nurtured before.

We owe it to the journalism community–and our students, schools and society–to address the lack of diversity among the ranks of scholastic journalists.  Diversity isn’t just a nice thing to do.  It’s good journalism.

Use ScribbleLive to blog live, aggregate from social media