Perhaps the most sobering piece of information one can glean from Poynter’s recent webinar is the cut in newspaper newsroom workforce:  down 30 percent since its peak in year 2000.

On the flipside, survival of the market share is inspiring experimentation and potential partnerships  previously considered taboo.  Every angle to drum up value for the news product is under magnification.

Hosted by Vicki Kreuger, Poynter’s Director of Interactive Learning, and Amy Mitchell, Acting Director for the Project for Excellence in Journalism, the “State of the News Media 2013” shared trends in today’s news market.

The Effects of Newsroom Cutbacks

A decade, or years at least, of diminishing resources are eroding the power and revenue that supports solid reporting.  Effects of limited resources are evidenced in  government reporting (no state-level reporters in Washington), beat reporting (“long gone”), magazine subscriptions, a struggling ethnic media, and shifts in types of stories.  For example, a live broadcast report costs more than bringing someone in to talk in front of a camera, so live reporting is being replaced by more interview segments and shorter pieces. The overall trend is less government reporting and more reliance on traffic, weather, and sports.

Signs the Public is Taking Notice

Although newsmakers continue to provide deep stories on an occasional basis, and to augment content by using wire services and other partnerships, surveys identify the most engaged consumers, the ones aware of the news industry’s financial struggles, are leaving the market.  Of these, almost two-thirds said stories are less complete, implying they can tell a difference in actual reporting.

The struggle of supplanting lost revenues from legacy institutions continues.  Essentially, gains from digital revenues are growing slowly and losses from print revenues are increasing.  The gap between what’s being lost in print versus what’s being gained in digital isn’t enough to replace previous levels.  The question remains how news organizations can create value.

Technology companies, such as Google and AOL, have steamrolled ahead “both in terms of gaining that digital dollar but also in understanding and having access to much of that audience data, knowing how to use it, and by having the strength in those two areas of being able to determine the future as things evolve,” said Mitchell. “The news industry finds itself on this treadmill trying to keep up with all the latest changes and at the same time not getting that much of that revenue they would have hoped to in that digital realm.”

Although more people consume news on mobile devices and the revenues have grown in the mobile digital display market, six companies — none of which produce news — realized 72 percent of the revenues:  Pandora, Google, Millenial Media, Applie iAds, Facebook, and Twitter.

Digital advertising in local markets is a sector many are vying to dominate, as 2012 saw a growth in this segment.  What might result from new and better capabilities to determine geographic and demographic data is fewer direct local ad purchases.  A company can now buy at a national level, but efficiently target demographics by smaller areas.  Because local digital advertising showed a 22 percent increase in 2012, the bigger companies like Google and Facebook are devoting resources to sell ad space to the local advertiser.

In addition to shifts in local and national advertising strategies, a new advertising ethic is emerging.  Many companies buy native or sponsorship ads, virtually piggy-backing on an organization’s followers.  Such ads, like paid advertisements in print, might look like one tweet amid other tweets, for example, but set apart as a sponsored ad.

Of the 1,300 daily newspapers, 450 now have a digital pay plan, most like the New York Times metered model in which a certain amount is free until a viewer hits  a paywall.  The fear that charging for digital content will scare away subscribers might be unfounded, as even newspapers other than the NYTimes are seeing slight gains in circulation (print plus digital).  On another note, however, even the NYTimes has experienced new thresholds in subscriptions, seeing for the first time ever its circulation revenue surpass its advertising revenue.  “That’s really quite a threshold to have met because the newspaper industry has relied heavily on advertising revenue,” said Mitchell.

The Vulnerability of Local TV News

Although local TV news is still no. 1 in terms of where people say they get their news, surveys show local television news viewership is declining, especially among adults under 30. Viewers say they are going to local television for traffic, weather, and breaking news. However, Mitchell said, consumers who have moved into digital as well as mobile for such content can find and replace it with other convenient or on-demand outlets, whether it’s a news outlet or non-news outlet, whether it’s Google or a weather app or a weather cam, for instance.

Revenue data shows election year spending has becomes the crux of local TV news revenues.  Unlike print audiences whose migration patterns went from print to online and whose news consumption increased, it’s unclear where  the television audience is going.  The question is whether television news viewers are also using their mobile counterparts, the television news apps.

With a rising gap in PR workers to journalists (1.2 to 1 in 1980 to 3.6 to 1 in 2008), newsmakers themselves are gaining an upper hand both in terms of their ability to reach audiences directly and to put their messages directly into the media, a “media in a weakened state,” said Mitchell.  Many non-profit organizations with communications specialists are producing serious pieces on health, science, and the environment, for example.  Because traditional news organizations no longer have the capacity to do such in-depth pieces themselves, some are running these guest pieces as is and by-lined.  In addition, more partisan narratives are driving news because of this lower capacity in newsrooms. 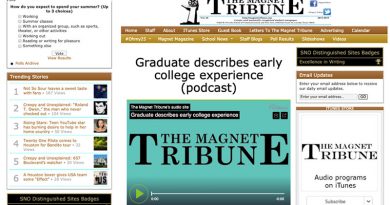 Podcast on a budget – Promoting your podcast

Looking Back Can Yield Great Stories

You can use Indesign CS 5.5 to make Interactive buttons. Here’s a tutorial to show you how.

January 16, 2012 Kelsey Bell Comments Off on You can use Indesign CS 5.5 to make Interactive buttons. Here’s a tutorial to show you how.