Nick Luccehsi, Web editor for the Riverfront Times, took a few moments to shed some light on what RFT does with Twitter and other social media. While many news outlets just push headlines, @riverfronttimes does a bit more to engage their readers and have a conversation. I think they do a great job with their social network presence and Nick does very well in this Q&A to explain their philosophy. For many staffs who read this, it will make you rethink what you’re doing with your social media.

What is your title and job description?
I am Web Editor for the Riverfront Times. I assign photo slideshows,
edit blog posts, write blog posts, manage and prioritize content
presentation on our web site, work with reporters to add multimedia
(photos, video, mp3s) elements to their stories and seed that content
around the web, bringing it to readers who might have otherwise missed
it.

How many people running the twitter/facebook accounts?
I run the @riverfronttimes account, our music editor runs the @rftmusic
account, our food writer runs the @gutcheckstl account and our marketing
department (a few different people) run the @rftstreet account.

What is RFT philosophy on use of social media?
In regard to utilities like Twitter, I want to foster two-way
communication between the paper and our readers, as well as report news
and share content they may find interesting. It gives our readers direct
access to us through mediums they’re already using and comfortable
with — Twitter, Facebook, Digg, etc.

Many sites push links, you all seem to be a bit less formal and looking
for a conversation here, why is that?
I hate spam as much as anyone, but I also want to draw in readers, so I
personalize our content into conversational form (not just a stream of
headlines) that I think works in concert with the spirit of Twitter.

What guidelines do you have as a staff about how and what to post?
It’s up to the music editor and food writer for their feeds, but
overall, it’s mainly a stream of links, observations, RT’s of
interesting news they think their followers would enjoy reading or
conversations with readers or like-minded folks.

What is your reply policy?
I try to be helpful in replying to people who ask us questions about
past or upcoming stories and point them in the right direction. In
general I try to reply to everyone who @RiverfrontTimes us, unless
they’re flaming. I’m not going to get in an argument on Twitter,
ever. 🙂

Are you worried that having the conversation on the social media sites
is taking from your site traffic?
No. If anything, it helps us as a “brand” I suppose, in getting the name
of our publication out there. If used smartly, it can also be a boon to
site traffic numbers, not a detractor.

Have you all done any giveaways, if so, advertisers paying for that or
s/t you’re just trying?
We do concert ticket giveaways, movie ticket giveaways, etc. But those
mostly are done on our @RFTStreet account (so follow it!) It’s against
Twitter’s terms of service to pay for Tweets and it’s just something the
editorial side won’t do. I imagine the marketing side wouldn’t dare do
it either.

How have you worked to build a following?
Hopefully it’s happened organically, but I do follow people from St.
Louis or those who Tweet about St. Louis. In the beginning I went to
twellow.com and just sought out people from St. Louis and used the
search.twitter.com page to find St. Louis-related tweets. I also
searched “RFT” and “Riverfront Times” a lot. I find that now most of
those people are already following us. There are more people joining
every day though.

What good has RFT seen from their use of social media?
Well it’s certainly helped traffic to our site since I came on in March
2008, but more than that, it’s helped spread our stories, photohas moved the perception of our publication as a weekly newspaper into a
daily news outlet. 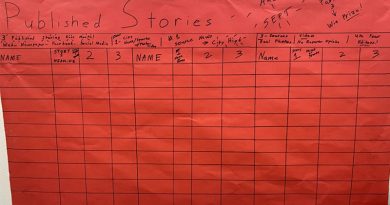 Start the school semester off with a Published Stories Challenge

Struggling online so they won’t have to