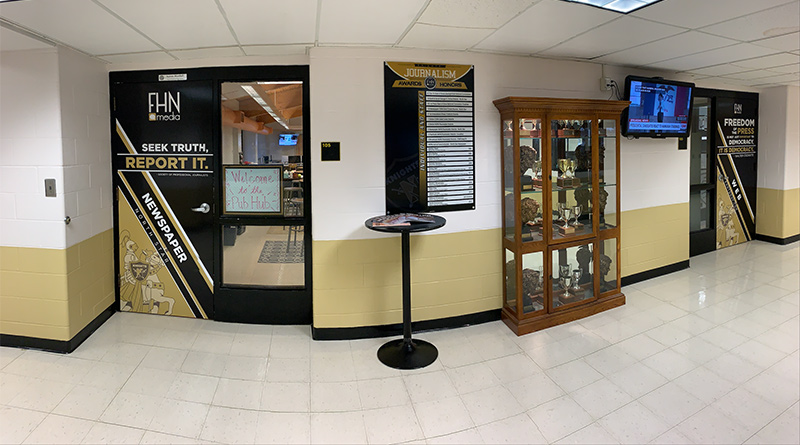 What is your name?
Aaron Manfull

What school do you teach at?
Francis Howell North High School

What city and state is your school located in?
Saint Charles, Missouri

How many students are involved at the media program at your school?
Around 105 on staff with approximately another 200 that go through the intro classes each year.

Describe your space for us.
Jordyn Kiel and I run the program and share some very nice space. We have 5 rooms at the front of the building that are essentially connected. It’s a huge step up from years ago when we had four rooms that were spread throughout different floors and different parts of the building. Three of the rooms are all interconnected and are the production rooms for the staffs. One of the rooms is where the six intro classes meet daily and the final space is a studio space where students can take photos, make videos or record podcasts.

What do you think are some of the benefits of the workspace you all have?
Having worked for nearly 15 years in spaces spread throughout the building, it’s so nice to have all of the work space in one area together. From an adviser standpoint, it makes it a lot easier to pop in and out and help people when needed. Our space is also near the front of the school so it’s a pretty active area in the school that is visible by the masses.

What do your students like most about the workspace you have?
The students really like having things together as well because if they go to the photo studio and forget something in the photo cabinet, they don’t need to put their running shoes on to get back to the room.

The computers are separated into pods and students really like that too because section editors can get their team together and have a mini-space that is all theirs. We’ve gone with a few different room configurations throughout the years but pods have always worked best.

The conference room is great for meetings and for the masses to come in and eat lunch and the coffee pot, keurig and music speakers are less of an option and more of a necessity.

The high top tables and stools where they come in and start each day are also a nice space for them to sit at in the morning before school and they give off a different feel than the traditional classroom space.

What computer programs and/or apps is your staff using on a regular basis for their work?
We use lots of different programs with the program. Google Docs are used quite a bit and Slack is what the staff has moved to for most all communication. Also, every student in the program is given an Adobe license while they are on staff. So, students can load any and all Adobe programs on a home computer or one they check out from the school’s library.

What tech equipment are your students using on a daily basis?
They use Canon cameras. It’s what they had when I arrived 19 years ago so we’ve just kept on that train. The video staff mostly uses DSLR cameras for their work as well. We find it’s just the most economical choice for us to make. The cameras can be used for photo and video. Through Donors Choose we did get a couple dedicated video cameras for livestream broadcasts last spring and they were a great addition. We have a couple 360 cameras and once I brought a drone for the program. That’s probably the only purchase I’ve ever regretted — other than cheap tripods.

Aside from the computers and the programs, what are one or two pieces of equipment that you have that you think other programs should have.
I like toys and gadget so this is tough, but I think some sort of gimbal for mobile devices is a great investment. Something like the Osmo Mobile 3 is great for capturing steady video with a phone. There are lots of different models out there. Aside from that, I think a nice set of studio lights and a backdrop of some sort will come in more handy than you can imagine.

How is your workspace funded?
Students work to raise most all of the funds for the program. They sell ads each year as part of the curriculum. Yearbook sales and yearbook senior ad sales also play a large part into revenue. While the district has purchased computers at different times for the program, the administration sees the program as one that should be mostly self-sufficient.

Do you have anything on your wishlist for your space? If so, what do you have and why?
I wish there was more storage. I know that doesn’t sound too exciting, but aside from the file cabinets you see around, there is no storage and that’s something we need. In addition, I would like some dedicated audio booths so the podcast and video people don’t have to share a space. Other than that, we are very blessed with the space we have.

(This is one of a series of posts where high school newsrooms are showcased. We’d love to showcase your newsroom on the site. To find out how, check out the information here and submit yours today.)﻿ 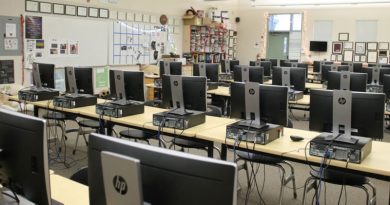 I’m adviser Sarah Nichols, and this is my newsroom…

Hosting a Digital Media Workshop in 2017? Tell us about it.