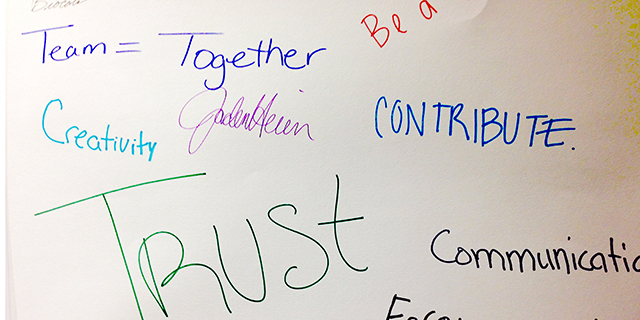 My 21st first day of school (as a teacher) has came and went in the blink of an eye. The first week honestly felt even quicker. That’s the funny thing about time, the older we get the faster it seems to pass.

As I entered what very well could be the “last third” of my career, I decided that Blue Jay Journal TV didn’t need to start off with a lengthy syllabus and course expectations.

Instead, I decided to throw in some clips from one of my favorite movies of all time Hoosiers and a comical clip from one of the most-clever cartoons in recent years Penguins of Madagascar.

What could the 1986 film starring Gene Hackman and Denis Hopper possibly have in common with yet another hit produced by the DreamWorks team? Better yet, what could either have to do with teaching a broadcast class?

In a nutshell: teamwork.

If you haven’t taken the time to really analyze Hoosiers or Penguins, then you’re missing out on two great examples of teamwork. Every team member is valued and has a role. Sometimes those roles may shift if the situation calls for it, but the team always comes first. Granted, one team pulls off a feat that is Indiana folklore, while another likes to escape zoos, illegally obtain various modes of transportation, and annoy lemurs.

While, Blue Jay Journal TV isn’t out to take the state basketball championship or hotwire an airplane to fly to foreign lands, we are out to be the best team we can possibly be.

This all set up the first assignment my staff had this year. They had to go home and on their own write down the traits of the “Perfect BJJTV Team.” The next day they had to stand up and share their results with the class. What’s amazing is that without talking to each other, common themes popped up.

Trust.
Everyone has voice.
Respect.
Give and take.
A safe environment where everyone is valued.
Have each others’ backs.
Patience.
Listen to each other.
Reliability.

The list is actually longer than that, but you get the idea. As common themes came up, we took turns writing them onto a big poster board. Then, we all signed it like a contract. (Yes, I signed it, too). It’s now hanging on the door that leads to where we house our tripods. It is in a place where staff members see it almost daily.
This little exercise already has more of the staff talking to and messaging each other. It’s broken the ice. They have jumped from timid to not afraid to speak up, ask questions, or offer ideas.

I have learned that while time is flying fast for me, for my students it still seems to be moving a little slower. They have admitted the first days of school can seem to drag on for an eternity. Instead of being yet another wall of rules and procedures the first days of school, I decided to capture their attention and put the focus for our staff where it needs to be.

B-roll, shot sequencing, memorable characters, and all that other great broadcast stuff will come. However, if we don’t build the team now, it will not be an enjoyable or smooth process for anyone involved.

Will we build the “Perfect BJJTV Team” this year? Only time will tell, but it sure isn’t from a lack of effort! I’ll try not to blink and miss it.

Backup your staff’s work on an external drive each year

[Video] How to Use Filezilla to Transfer Files