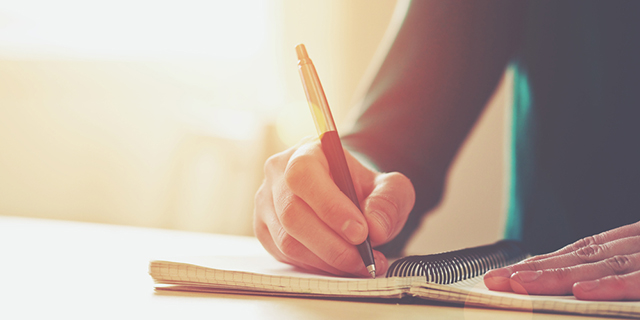 It is very common for young broadcast students to avoid the challenge of writing a script and recording voiceovers. One of the common shortcuts around the process is to post a full-screen graphic which presents a question, followed by a sound bite that addresses the question.

But we are not creating slide shows or power points for our newscasts. Those both have their place, but not in a news package. There may be exceptions, but letting kids take this easy way out teaches them little about news writing, and the important skill of “writing into the bite.”

Here is a pretty typical example of letting a screen of text do the heavy lifting in a story: EXAMPLE OF A SOUND BITE that follows the graphic:   “We tried to think of a way to get the word out about the needs of the kids to the entire community, not just the school. Sponsoring a race for all age groups, for everyone in town, was the perfect way to do that. And our boosters had a blast putting it together. It was a really fun day, and we raised $2,000 for a great cause.”

That graphic approach seems simple because it is. It also does nothing to really set up the context of the sound bite that follows. Here is an example of writing into the bite above with a reporter voiceover:

Voiceover: “The Booster Club decided to step in and help the cause, hosting a 5K benefit run for the kids in need. But this 5K was not just a Center High project. It had a more ambitious reach.”

That lead-in voiceover sets up the bite, but does not take away any of its impact by saying too much, or giving away details the source adds in the bite itself. Writing into the bite is like serving just the right amount of appetizer before the main course.

Remember, the foundation of a broadcast news package is the writing that goes into it. Words matter. The reporter is the tour guide for the viewing (and listening) audience. Pictures and sounds help tell the story, but the words you write are just as vital. Plus, it’s your job.

One last thought. How are you ever going to become a news reporter if you do not write news and report it?

Save the full-screen graphics for your next power point.

[Video] Setting Up Different Access for Users On Your WordPress Site

Use WordPress to have students create online portfolios of their work