Esquire Magazine  recently posted a “trailer” to a print feature that will appear in its March issue about the Zanesville, Ohio, animal massacre. The trailer is relatively simple — mostly audio with a black screen and speaker credits — but the idea is very innovative. Why not utilize all forms of media at your disposal, and what better way to drum up some anticipation for an upcoming article than the age-old movie trailer?

Forward-thinking news staffs with mutimedia capabilities should take a look at this approach. It could be a fun way to promote individual features or even a whole print edition. Nothing makes people want something more than when they think they are supposed to want it — which is just the kind of anticipation a trailer can build for your content.

Live Broadcasting: One School’s Move From a Cardboard Box to a Full Production Using Livestream 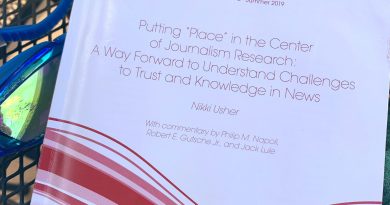 Proving the importance of place in student publications