As young people’s use of Internet evolves, student journalists must change, too

With technology evolving at a record pace, are we already behind the times as we spend our resources developing student news websites? Wired magazine’s September 2010 cover story titled “The Web is Dead: Long Live the Internet” discusses this very issue. (Click here to read the story.)

The article’s premise is that the Internet is almost 20 years old, and in that time we’ve learned to fine-tune our use of it. In particular, when we think of our students, they’ve never known a world without Internet access and their tolerance for the chaos that is the Worldwide Web is more limited than the tolerance level of us Gen Xers. With the advent and growing prevalence of devices like smart phones and iPads, there is an increasing number of people who simply don’t go on the web anymore; rather, they use apps and RSS feeds and IM conversations and email. In other words, rather than browsing at their desktops, trolling for whatever information they might come across, users now simply go and get the specific information they want and then move on. The Wired article cites a projection conducted by Morgan Stanley: Within five years, it states, the number of users accessing the Net from mobile devices will surpass the number who access it from desktop computers. Those mobile devices, it should be noted, work better with “specialty software” (think “apps”) that do specific tasks well.
Before you get too anxious, note there is a distinction between the “Internet” and the “web.” The Internet is the “cloud;” it’s where all of that information is stored.

The web, for lack of a better term, is an app that lets users access that information. The problem with the web, though, is it’s clumsy and clunky. It almost does too much, and today’s users don’t have time for that.

So what can we scholastic journalists do with this information? I mean, geez, should we scrap our websites before they’ve even left the starting gate? Thankfully, the answer, in the short-term at least, is no (go ahead and breathe a sigh of relief). After all, we’ll still need a place to house all of the information we’re compiling. Where else is it going to go? However, we also need to understand that our student readers won’t tend to type in our URL on their desktop computer. (“That’s soooo, like, 2009.”) So we need to go where our readers are and then steer them toward our websites to get even more information. What does that mean today? It means social media like Facebook and Twitter. It means finding a way to turn our sites into apps to be accessed on mobile devices.

As I often tell my journalism students, we have two obligations. First, we need to meet the needs of our readers. We have to find out what’s making news in our communities and share that with our audience. But second, and perhaps more important, we have to meet the reads of our needers. Simply providing information isn’t enough. We have to go where our readers are and present our information in a way that’s palatable for them. That second task is way harder in many ways because it’s always changing.

As the Wired article states, “The Internet is the real revolution, as important as electricity; what we do with it is still evolving.” Indeed, the world is changing quickly and we need to change with it. 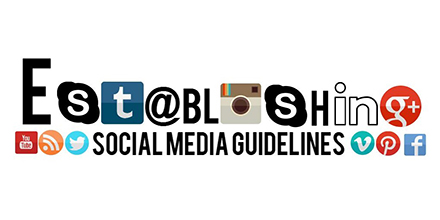 Tips for creating a social media policy for your journalism program

Everything I Learned About Digital Media