Like many journalistic Web sites, the HiLite Online allows readers to comment on stories. The process of how we post those comments and what legal ramifications, if any, staffs assume that post those comments have been discussed in other articles both on this site and via the Student Press Law Center. This article, on the other hand, will address the decision to allow comments in the first place.

Of late, this issue has been particularly relevant at Carmel High School as student newspaper staff members have navigated the tricky process of covering allegations of sexual harassment and bullying involving members of the men’s basketball team. For most of our online stories, we allow readers to comment. Those comments, which tend to be relatively anonymous, go into a sort of “holding pen” to be approved by editors and posted to the site. For the most part, all comments are approved, unless they are clearly a piece of spam or contain personal attacks or profanity, which are against our stated guidelines.

But for this particular story, the editors already saw the potential problems. Because of the nature of the allegations and the immense amount of speculation surrounding them as well as the high-profile nature of the school and the basketball players, the editors anticipated a deluge of comments that could be considered, and I’m putting it lightly here, “inappropriate.”

Turns out, they weren’t mistaken. Many of the so-called “professional” media outlets that covered the same story did not disable the comments section on their Web sites. As you might expect, the conversation, while robust, deteriorated quickly. To my staff members, the simple fact that those media outlets allowed such commentary to occur was enough for them to lose their trust in those media outlets. That was also enough for the students to disable the comments on the series of stories they were writing.

They’re not alone. This article from the Poynter institute discusses how several news organizations have set up formal policies to designate on which stories users can comment. Those stories that are off-limits usually center around hotbed racial and hate-related issues. But not all stories can fit into such neat guidelines. Staffs who consider which stories on which to allow comments should do so on a case-by-case basis.

The only concern for my staff, however, was the potential problem that not allowing comments might bring to light; namely, they felt somewhat hypocritical in promoting students’ right (and their own right) to free speech and the media’s right to know while also disallowing that free speech on the Web site. Their solution was to still provide readers with the ability to comment, albeit with a more “old-school” approach. At the bottom of the articles, the students outlined the process for writing a traditional, signed (i.e. not anonymous) letter to the editor. With that in place, the editors felt satisfied that readers could still comment, but the process of sending a signed letter would perhaps provide a level of insulation against the types of anonymous commentary they saw elsewhere. In other words, they felt their obligations both to their readers and to their professional judgment were served.

So far, they haven’t received any letters. Then again, the story isn’t over yet.

Factors to consider when starting a Broadcast Journalism program

Twitter: What it is and its potential for scholastic media 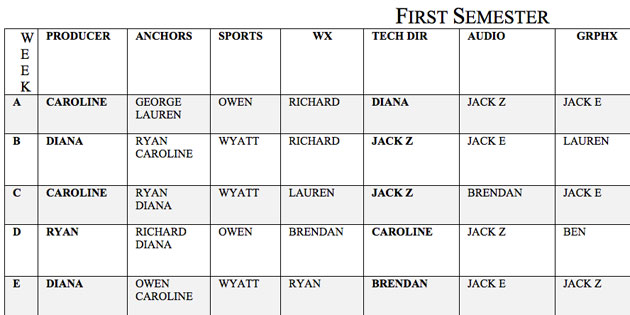