For two days last week, the two of us, both journalism educators, avid news-users and news men, attempted to use Apple’s iPad for all of our electronic communications needs.

We put away the laptops, pads of paper and our pens.

Why? To see how our media usage changed as educators, as journalists and consumers, and to try to determine the iPad’s possible place in scholastic and mainstream journalism.

It worked this way: Robert left his laptop on his desk (he tried futilely to leave it at home), starting at 9 a.m. Our rules were that only as a last resort could he use his own computer — or anyone else’s — to get his work done. The iPad would have to suffice until 9 a.m. the next day when David would pick it up and do the same.

Both of us tried to abandon our smart phones (David an iPhone, Robert a BlackBerry), except for making and taking calls.

So, for those 24 hours each, we did email, word processing, entering grades for students, blogging and reading books and PDFs. And, of course, we used it for reading media.

• The iPad – and other soon-to-be-available tablets – might be the first device that serves as a hub for teaching and consuming convergence media. As Apple continues to extend its licensing agreements, we will see a broad range of textbooks become available on iBooks. It already lends itself to editing images, and it easily updates websites that are operated via content management systems. For the most part, all of this is great until — or if — the WiFi cuts out. (3G iPads, to be released later this month, will help solve some of this problem.)

• With the iPad, students now have the opportunity to not only produce content, but to design it. The journalistic tool most victimized by the mobile revolution is design, but the iPad can — and should — revitalize our commitment to good design. The iPad’s display screen, slightly smaller than a standard MacBook, is welcoming to publication designers, despite its slight glare in the sun or under a lamp.

• It’s fun. Already, our own students tell us that they are excited about working in print. They want to create good content, and the iPad is a good publishing tool that will continue to excite students about print journalism.

• The iPad is incredibly convenient for media consumption, while moderately convenient for media creation. Word processing in particular can be trying, for these reasons:
1. Say goodbye to knowing your homekeys. Unless you peck on a keyboard like the old-schoolers (or like Robert), the iPad’s touchscreen keyboard is small and takes considerable getting used to. In the end, though, you might be be just as fast as on a regular board.
2. There is no Microsoft Word. Say what you will about Microsoft’s business philosophies, but there is no doubt the world is hooked on Word. David, especially, felt lost without it.
3. Robert used the Pages application to do his documents. However, when turned sideways, the keyboard and writing surface grow and the toolbar disappears. So when you want to alter a typeface (bold, italicize, etc.), you have to turn the entire iPad 90 degrees to activate the toolbar, then turn it back to return to your previous word-processing format. He tried not to do that too much.

• Most surprisingly to us was that the iPad made us want to read more. Both of us found ourselves reading story jumps (or, on the iPad, story flips) in The New York Times, Wall Street Journal and USA Today. We won’t begin to explore the psychological triggers as to why it was such a seamless step on the iPad yet continues to be a chore on the traditional web or even in newspapers.

But for whatever reason, the jumps were no obstacle to us following stories to their conclusion. And indeed, for Robert anyway, he has read more out of the Times and the USA Today combined on the iPad in the last week than he has in the past year. Maybe it is because the iPad is so new, or maybe it is because the media is still so inviting.

Our answer is simple: It’s enormous.

This technology is an excellent tool for teaching with students, rather than at them. We can quickly turn to a story and show them how and WHY they should write the way they do, and how and why they should know the multimedia functions. Why one should write short, why we should use bullets, and how to best create convergent media that complements itself.

Robert liked being able to access anything anywhere. He moved from room to room, all over the building, without needing to lug bags and stacks of paper.

Such a device can aid in the teaching of writing, reporting, research, design, website management, advertising and marketing, and several other areas surrounding journalism.

But there were some drawbacks:

• Robert found it easier to use his computer to chat online in programs like Facebook and gchat. The interface on the iPad just didn’t cut it. In fact, it didn’t work at all.

• The price. Models run between $500 and $830. And that’s just for the pad itself. That does not count the multiple apps we downloaded to do our job, such as Pages, and the subscriptions to read certain news apps.

• David griped that it doesn’t replace an existing product. Even with the iPad, computers are still necessary, and phones are a must. Sadly, the iPad does not have that function and we both wish it did. In other words, iPad might be viewed as yet another thing among things “essential” for everyday life. It doesn’t help you simplify as well as it should – yet.

The iPad and tablet potential for teaching and consuming media is staggering. David, admittedly, came into the experiment skeptical about the iPad’s usefulness. Although he remains hesitant about it as a personal device, he was won over by the iPad’s professional possibilities. Still, he will wait until at least the next generation of iPad is released before buying one.

Robert continues to incorporate it his into his life as a student, teacher and husband. He uses his iPad to record grades, create original documents, consume his students’ work, and perform various other functions of everyday professional and personal life. His wedding photos look amazing with the iPad’s glossy screen. (They are pretty enough that his wife almost forgot to ask how much it cost — almost).

To David, the iPad’s greatest upside is its potential. To Robert, much of that potential already exists.

David Schwartz, a former reporter, is executive director of the Iowa High School Press Association and an adjunct instructor at The University of Iowa’s School of Journalism and Mass Communication. Robert Gutsche is a Ph.D. student at The University of Iowa School of Journalism and Mass Communication and is a co-founder of the nonprofit Iowa Center for Public Affairs Journalism. 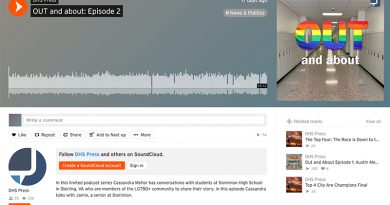 Podcasts for High School Journalists: DHS Press – Out and About 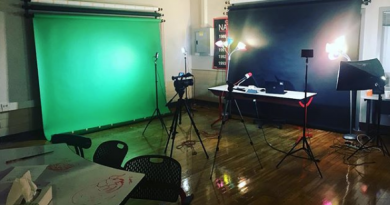 I am an adviser Jonathan Rogers, and this is our newsroom 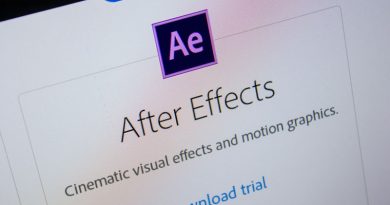 Adobe After Effects: Check out some of the program’s new features in its 2019 spring release